This article is exclusive to the Online Edition 1 of VARSITY News.

In recent modelling data released by the National Institute for Communicable Diseases in April, South Africa’s third wave of COVID-19 has taken centre stage as the institute issued its report on the possibility of a new peak of the disease approaching.

The report, released towards the end of April, detailed all the possibilities of a third wave of COVID-19 arising in South Africa, ignoring the possible effect of the vaccination process on the spread of the disease.

It concluded that in terms of the trend, the third peak should be lower than the second, with fewer hospitalisations if no new variants of the disease make themselves known in the South African population. 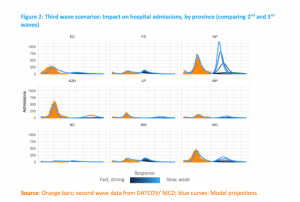 The report also mentioned that a delay in the resurgence of the virus may allow the country more time to vaccinate its population, thereby further reducing the burden of a third wave on the South African health sector.

The country’s mass vaccination initiative has been an issue of contention as the rollout of the South African tested Johnson and Johnson vaccine was suspended in April amidst concerns surrounding possible negative side effects. While South Africa has managed to get its hands on a shipment of the Pfizer vaccine, in the first shipment there were only 200 000 doses, painting a grim future for those members of the population eager to be vaccinated.

As of the time of writing, no new variants have been detected in the country, meaning there may be some time left until South Africa experiences the brunt of the disease’s third wave, but as a whole, the NICD data leaves no question that a third wave is looming, whether our population is prepared for it or not.